This has been a very laid back and tranquil Sunday for us.  We had dinner here last night, 10 of us, and consequently, it was a much later bedtime than we two old farts are used to!!

I was desirous of being close to the sea and headed off by myself for the Praia de Faro, which is situated on an island called Ilha de Faro, also known as Península do Ancão.  It stretches out about 5 kms..  I have walked parts of the beach many times but never as far as the end of the eastern point.    I walked it all today and literally stopped right at the edge of the Atlantic where another sandbar island lay about 100 meters away. 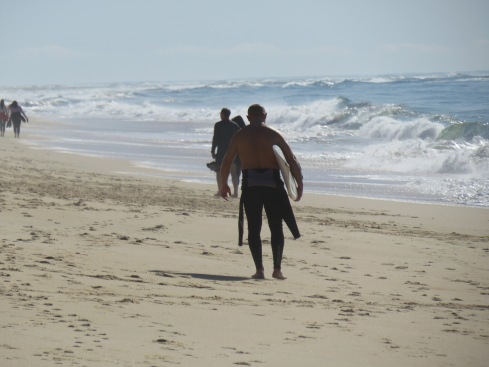 The surf was up, the tide coming in and probably 50 or so surfers riding the waves.

This is looking back in the western direction. It was fairly empty when I set out but when I finally looped back, about two hours later, it was quite occupied.

There is a surfing school on the east end of the island that I wasn’t aware of. Seemed to be many student surfers today. 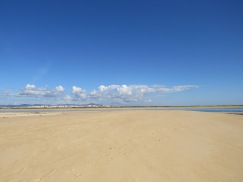 Here I am at the extreme eastern end with Faro off to my left. 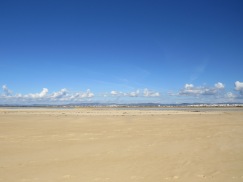 Another shot of Faro off in the distance.

Here is the end of the island. You can see another sand bar off in the distance.

Other than the surfers, I had the entire end of the island to myself.  At one point as I started the trek back I was slightly below the dunes and was totally alone.  I stood there listening to the sound of the waves and enjoying the warm sun on my face.

As I headed back on the most northerly part of the island I discovered an old boardwalk and decided to take it.  I was quite glad I did as it looped through a small “village” of either fisher’s houses or gypsy squatters.  I couldn’t quite tell.  It was however very picturesque and although there were a few folks about, quiet.

A small cove where I discovered a number of fishermen’s huts and a few fishermen mending nets.

Fishermen don’t tend to fish on Sunday, perhaps this was a pleasure trip.

The dunes stretched on and on in the middle part of the island.

This was the most easterly house on the island.

Lots of activity on the water between the island and the mainland. It’s obviously much more tranquil than the open sea.

This led to a private beach house where the sound of many chickens was almost comical. 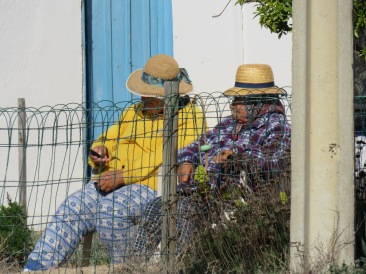 These two very old woman were having a quite chat and enjoying the sun. I called out Bom Dia and was rewarded with big toothless smiles and friendly waves.

This place was constructed, and that’s being kind, right on the edge of the dunes.

Massive plots of geraniums were everywhere mixed with various succulents.

Another place that looked to have been added to many times over the years. 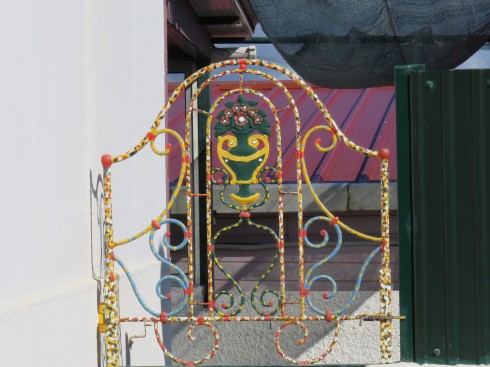 Somebody took the time to hand paint this old gate. An act of love no doubt.

Most of the houses are slightly spaced and each view between homes was always a surprise.

Imagine waking up in this little place each morning, right on the sea.

I loved the colour of this but also the shadows.

Tucked away in a side garden. Again the shadows caught my eye. 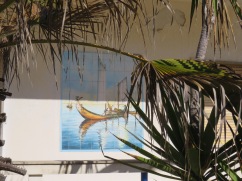 This is quite a large tile that looked to be hand painted. I had a perch on a small wall to angle myself and my camera up through the palm fronds.

A thoroughly wonderful walk.   Quiet and peaceful, the warm sun keeping me company and after a while, the noise of the pounding surf was hardly noticeable.    And in closing, a little eye candy for those of you who enjoy that sort of thing…..I know who you are!

12 thoughts on “Sunshine On My Shoulders”