The tiny fishing village of Fuzeta in the western Algarve will always be special to me.  It was my first introduction to all things Portuguese.  It’s the closest village to the accommodations I first rented when I started coming to Portugal and I have such intense, and wonderful memories of walking back and forth across the Ria Formosa salt flats, lugging groceries, 5 litre bottles of water, tipsy from lazy patio lunches, and my list could go on and on.

Today, a dull and overcast Saturday, Marc and I decided to head into Fuzeta, park the car and wander along the harbour, the beach and part of the town.  We couldn’t have picked a better day to do this. 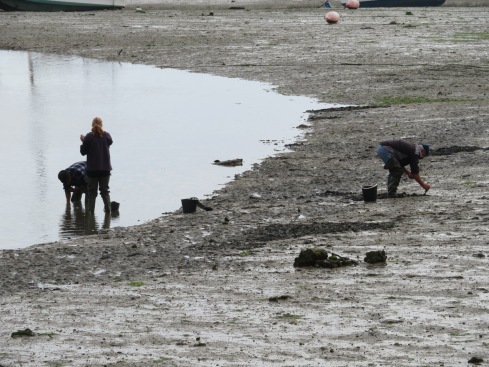 We parked the car and as soon as we got out we noticed these folks digging for clams as the tide was low.

This old, long abandoned boat, which probably still bobs on the water when the tide is high, was sitting forlornly in the mud.

The tiny local market was on near the fishermen’s market.. We purchased a large portion of local olives from one of the farmers .70 of a euro! Marc picked up a home-made walnut cake for 2 euros.

Inside the market building the fishermen are selling todays catch, which smells sweet and tempting to the tastebuds!

At the opposite end of the building from the fish counters are a few well stocked vegetable stands and a butcher. A great place for one stop shopping.

We were both struck with the changes happening all along the waterfront and the beach.  Heavy equipment was all over the place, large pipes being installed all along the shoreline for the preservation of coast and stabilization from erosion etc.. On the opposite of the harbour is a place that Gwen, Diane and I affectionally christened “the little beach”, very private and isolated.  Not any more!!  They have “imported” truck loads of sand and are developing that entire side of the old road and extending the beach.   Tourism is alive and well, which is great for the locals but makes me feel a little sad.  I’m thankful I had discovered it when it was still pristine and undiscovered. 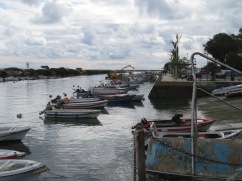 Facing from the town out to the open sea. 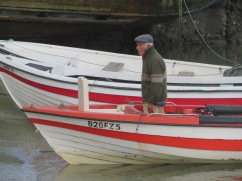 Just finished cleaning his nets and about to call it a day.

Still busy at work putting the boat to sleep until Monday morning.

A sign on the beach, completely dug up in places and truck loads of sand piled high in others. 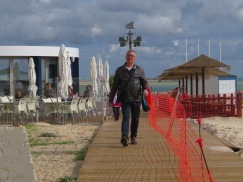 The boardwalk was still partially accessible and we enjoyed walking along, looking at the work going on, imagining the finished product as we watched them do this same thing on two of our other favourite beaches last year.

Mounds and mounds of sand, piled high waiting to be spread out once the work is finished. Not sure how much time we’ll enjoy on this particular beach this trip. 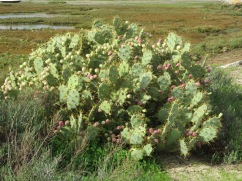 This large old cactus was covered in fruit. Right beside the sea, it clearly loves this spot.

We delighted in the glorious scent of the salt sea air.  It was warmer than we had thought heading out this morning.  We headed inland, towards the main square, to check out the menus and decide on lunch before hitting the grocery.

More changes.  Our little restaurant in the square is no longer.  Snack Bar Pierrot has a new patio, from the looks of things, new owners, and the menu was without prices….not a good sign.  The main sign above the door is gone and the interior has changed so…..we decided to pass for today…..maybe another time.

We quickly decided to head on to the grocery store then go to another old haunt nearby for lunch….Eduardo’s in Livramento.  We were not at all disappointed.

Pork Shank baked in the oven. Note the price….that was main, dessert, half a liter of whatever you wanted, dessert and cafe!! 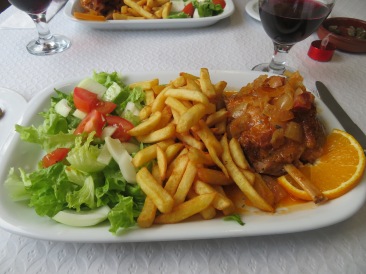 By now it was close to 15h00 and we were both a bit pooped from the wanderings and me a bit from the emotional reaction to seeing so many changes in this lovely, quaint little place I feel connected to.  The weather co-operated in that it poured all the way home………seemed to work with my feelings!!!  That said, I wasn’t sad at all, just nostalgic.   We did notice a couple of things worth photographing along our route.

And this magnificent brightly coloured plant. I’m fairly certain it is a type of coleus. Such rich colour. We spotted it from quite some distance away.

At home we settled in for the rest of the afternoon.  Marc started a fire, which is blazing at the moment.  I marinated a turkey leg……which could feed at least six people…..to accompany a portion of turkey breast for Marc (he’s not a dark meat lover) to be roasted.

And this for Gary…….we tried a new beer, confusing as it sounds German, and we bought it in a German grocery store, but the bottle and website says Spain!!!   It was .99 of a euro for a litre…….here’s to you Mr. Kean. 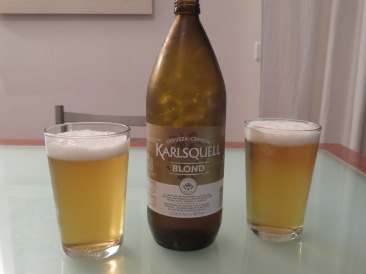 15 thoughts on “A Nostalgic Journey”